Its over a month since the wedding and I have yet to put up the ‘official’ photos of the event to the flickr pool, although there are over 200 photos available to see. Actually, some have their privacy settings turned on, so there may be less than that visible to the general public. Regardless, there are plenty of great photos that really help to relive the event.

The ‘official’ photographs were taken by my Dad who did a great job of sticking around to the very end. Jo and I have been poring over a couple CDs worth of images he has since sent us to try to put together the official Wedding Album. In particular, we wanted to find the image of us that we could send with christmas cards to all the aunties and uncles who didn’t come to the wedding.

For quite a few of the photos, I have had to spend some time in the GIMP (GNU Image Manipulation Program; the linux equivalent of Adobe’s Photoshop) touching up the images to make them just right. This has including doing minor things like removing red-eye to quite major jobs like swapping around heads from different photos to get everyone looking the same way with ‘nice’ smiles and no grimaces. I am particular happy with the results of our main portrait.

Below is a side-by-side comparison of the before and after images. Play spot the differences - there are 8 to be found. (With apologies to Meg and David for having removed them so callously - oops, thats give away two of the differences.) 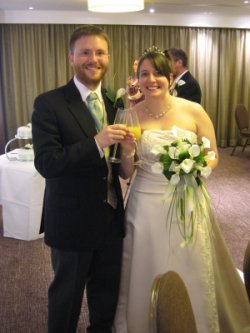 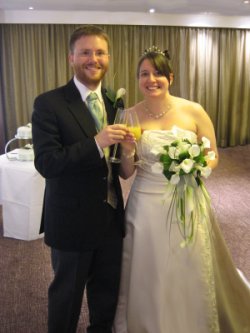