Get a Mac - UK style

Whilst I may not worship at the alter of Apple beyond owning an elderly 3G iPod, I do like their series of Mac/PC TV ads. Their blatant stereotyping of the suit-wearing PC compared to the hip and cool, hoodie-wearing Mac may be a little unfair, but they do get their message across. What would it take to get Bill Gates and Steve Jobs together in front of a camera for a real-life debate of their respective platforms? Unlikely I reckon.

Apple do invest a lot of time and effort on image and style. They certainly benefit from controlling the hardware that their software runs on - both in terms of controlling the look of the brand as well as being able to profit directly from it. I wonder how many people buy a Mac because of the look of the laptop they get to carry, or the operating system it runs? 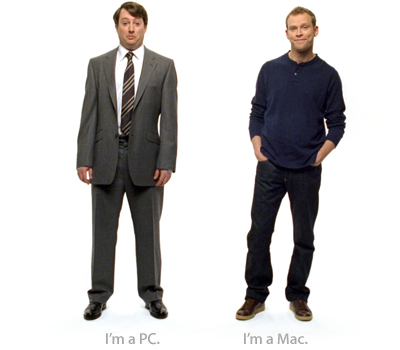 Either way, Apple just went up another notch in my cool scale; the Get a Mac TV adverts have been redone for the UK market, albeit it web-only, with the very funny Mitchell and Webb taking the Mac and PC roles. It’s a perfect fit for their characters - whichever advertising creative realised this, should be rewarded. There are only 6 ads up at the moment, but I’m sure more will follow.

Its not enough to get me to switch though - I’m in a position where I pay nothing for my Operating System and don’t have to pay a premium for the shiny white box to run it on.