If my last post was not intended to be a post about blogging, what did I intend for it?

Well, it was going to be a summary on the recent happenings in these here parts. Which set me off onto a train of thought as to why I hadn’t blogged about any of them already, etc etc etc. But I’m not going to make that mistake again.

So, what has been happening? 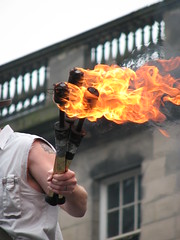 A couple weeks ago Jo and I spent a week up in Scotland. We were staying next to Loch Lomond at the Auchenheglish lodges. We drove up with no real plans for the week - which worked out very nicely. We spent a most days watching the Olympics in the mornings and then heading out to explore in the afternoons. I realise some might find it sacrilege to be in that part of the world and spend half your time sat on a sofa. But this was our holiday, and it was exactly what we needed.

At the end of the week we spent the day in Edinburgh, where we experienced a flavour of the Fringe festival, walked the Royal Mile from Edinburgh Castle down to the Scottish Parliament and learnt that city center parking is very expensive (£17 for 7 hours). All of this was despite the fairly damp weather that had followed us all week. We barely scratched the surface of what Edinburgh has to offer - especially with the Fringe on. We would happily return in the future to spend a good 3 or 4 days doing it all properly.

Afterwards, we spent the weekend with friends in Falkirk, where we took in the wonders of The Falkirk Wheel and heard all about the new stand being built by the owner of Schuh at Falkirk FC’s stadium. See, there’s my trademark wry sense of humour kicking in. To be fair, the Falkirk Wheel is an impressive feat of engineering and worth a visit if you’re in the area. We were, however, saved from experiencing the Falkirk stadium first hand.

What I found most noticeable when we got back to Southampton was how little I had missed the laptop and internet. In fact, with the prospect of returning to work, I would have happily left it all behind for another week.

Another highlight of recent times was the installation of our wood-burning stove. Although that was not entirely stress-free. Before going to Scotland, I laid some tiles in the fireplace for the stove to sit on. To my dismay, when we got back, the ready-mixed tile adhesive I had got from Wickes had not gone off and the tiles were not set. This led to a slightly frantic Bank Holiday Monday as I relaid the tiles, this time with some adhesive bought from a tiling shop. Thankfully the adhesive took and a quick bit of grouting later, the fireplace was ready for the stove guys the following Thursday. 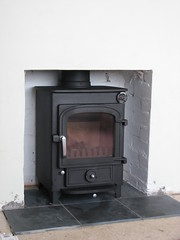 Working from home that day, I hid away in our bedroom whilst the two guys did their thing. With the chimney breast running through that room, it was clear who was the apprentice - he spent a lot of the day on the roof trying to get the lining down the chimney, whilst having instructions shouted back up at him from the other guy.

Eventually they were done, and we were left with our Clearview Pioneer 400 ready for action. The next step is to find a suitable supply of fuel. For now, I have been saving all of the off-cuts from the renovations - there’s plenty of old skirting board to get through.

Most recently, we went to Oxford last Saturday for Megan and Ben’s wedding. It was a great day for everyone, the weather was absolutely superb - which was very lucky considering August has been one of the least sunny on record. It was certainly one of the grandest weddings I have been to - set in the surroundings of Mansfield college.