Earlier this year, I was fortunate enough to get a pre-release Arduino Ethernet shield from the good folk at tinker.it to play with. At that time, I had spent some time trying to improve the TCP-stack for the nuelectonics ethernet shield, but that was hard work and I wasn’t making much progress.

The advantage of this new shield is that all of the hard work is done for you - the API provided is very simple to use and doesn’t take up too much program space. It also includes an SD card slot and although that isn’t supported in the library yet, it’s potentially a very cool addition.

Massimo has now announced the shield to the world. Hopefully they will be available from the tinker.it store soon. 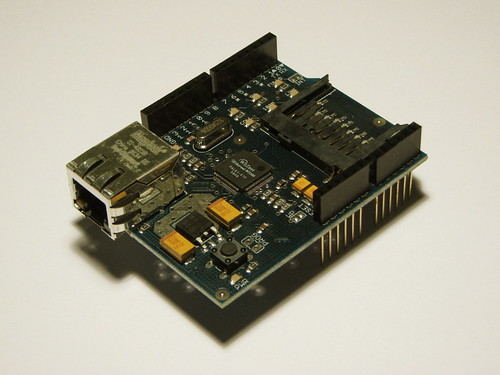 I have a cool project on the go using the shield that I’m going to hold off writing about for the moment. It touches close to what I get paid to do at work, so I have to go through a few hoops before I can make the code available publicly. Anyone following my twitter stream will have a good idea what it is already.

My plan is to write it up and release the code in time for HomeCamp, as it will tie in very nicely to some of the topics being discussed there.