We Made, We Hacked

As I had hoped, Saturday’s Makers & Hackers event was a lot of fun. After a kick off by Alex from Tinker.it, we split up into four teams vying for the two £50 prizes up for grabs.

I was in a team with jewellery maker Kali and advertising designer Andrew. After some time spent staring at our pile of arduinos, leds, beads and felt we set out to do something around interactive jewellery; something that could react to events around you and notify you of things. Cue five hours of prototyping, coding, soldering, beading, making and hacking. 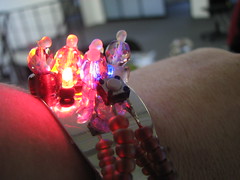 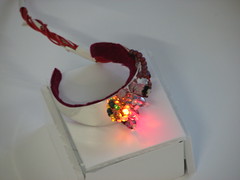 Our finished piece was a bracelet with 5 leds surrounding a central one, hidden by Kali’s great bead work, with a button to allow the wearer to interact with it. The concept was that the central led would alert the wearer to some event, such as they have new messages. The outer ring of leds could then be used to indicate the extent of the event, such as the number of new messages.

Now, clearly you have to ignore the tail of wires running off the piece connecting it to an arduino. They don’t make it very practical to wear - but there is no reason why the arduino couldn’t have become a feature of a second piece that could be worn as well - particularly if we had a Lilypad to hand. We started talking about having a jewellery ‘hub’ where each piece you wear connects together into their own network. Slightly more than we could have practically achieved on the day. 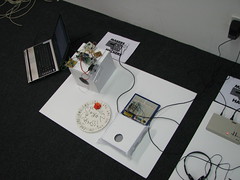 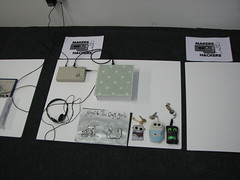 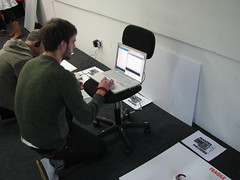 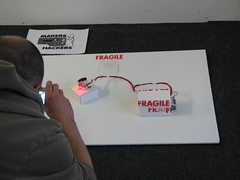 After a quick show’n’tell to everyone we got to vote for our favourite. Nigel and the Craft Girls came out on top of the public vote and my team got the experts choice, as voted for by the tinker.it guys there on the day.

Tinker.it will be taking both of our pieces with them to the UK Maker Faire in a couple weeks, so we’ve got a bit of time to tidy and polish before they get shown off.

You can see the rest of my photos from the day here and there is also the wider pool with photos from everyone else here. 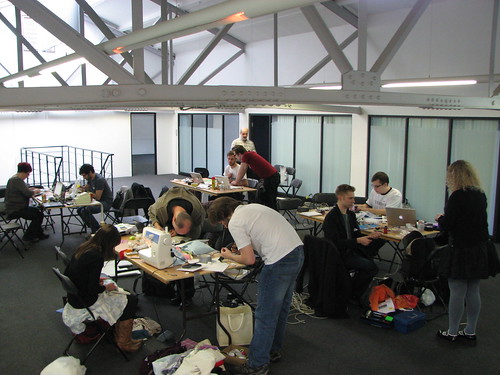