I recently got an O2 Joggler as a cheap touch-screen device that is easily hacked to become a generally useful device. To run Ubuntu on it is as simple as plugging in a suitably installed USB drive. I haven’t decided what I want to do with the device yet, but I wanted to see what could be done with the original software. 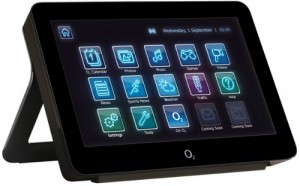 Under the covers, it already runs Linux with the entire interface built in Flash. This makes it a challenge to develop for - Linux certainly isn’t overrun with Flash development tools. After some trial and error, I have figured out the basics. So herewith a beginners guide to developing Joggler applications under Linux.

Note, this is not intended to be a Flash or ActionScript tutorial - I am not an expert. Everything you see here I have worked out from scratch this week.

This provides a number of useful tools for working with flash swf files. The key one for our purpose is as3compile - an ActionScript 3.0 compiler. 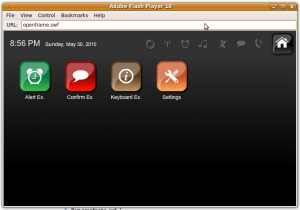 The documentation specifies what the icon movie must consist of - a 100x100 movie with a button. After some experimentation, I’ve got a template ActionScript file that does the job. Copy the following into a file called icon.as within the application directory.

Next, compile it to the required swf file:

If you launch the openframe now, you should see the icon in place.

As you can see, it isn’t the most exciting icon. But it does have a nice fade effect when pressed. To change what it looks like, you can play around with the DemoIconButton() method - with a little help from the reference on flash.display.graphics.

I’m still working out how best to approach writing the main application. There are some parts in the documentation that simply don’t work for me - this may well be a result of not using the official Flash development tools.

The docs say the main app needs to include a class that extends op.framework.OpenFrameApplication. I found importing this class, even without using it, made the app fail to launch. Not a great start. However, it seems to work without using this class.

Copy the following into a file called main.as within the application directory.

As before, compile it to the required swf file: 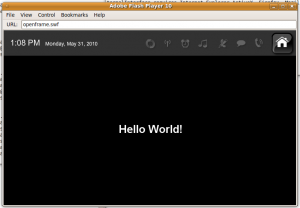 The framework includes a number of actionscript libraries to provide integration with the platform. They are provided as uncompiled actionscript files under the SDK/op directory. To compile against them, as3compile needs to know where they are. Assuming you’re still developing in the application directory created earlier, then the following does the job:

I have had mixed success using these libraries - here are some of my findings that may help you.. or not.

`op.framework.OpenFrameApplication`
As mentioned previously, simply importing this class is enough to stop things working.
`op.framework.OPLang`
This class provides access to the entries in `language.xml` file. When included, I get the following compile error for which I have yet to find a workaround: This currently rules out using this class.
`op.framework.OPLink`
This class provides the main link between the application and the underlying framework. When included, I get the following compile error: This is easily fixed by adding a space between the `*` and `=` in two lines of the library:
_Anything_ that imports `fl.*`
It appears that whilst `as3compile` can handle references to the core `flash.*` packages, it knows nothing of the `fl.*` ones. Haven't found a solution to this yet.

Running on the Joggler

You’ll need a means to copy over your newly developed application to the Joggler. Start by installing telnet, then ssh and finally scp.

The install process is the same as I described before; creating a directory for the application, followed by adding an entry to applications.xml. This all goes under /media/appshop. Once in place, you need to restart the software to pick up the new app:

As you can see, it isn’t the smoothest experience. But with some perseverance, the end results ought to be worth it.