Can it really be two years since I last wrote about my ambient orb? Given my output rate here, I’m not that surprised.

As a quick recap, I wrote about the idea of a multi-channel orb; using multiple RGB LEDs to let the orb show more than one colour at a time. I ended the post saying the plan was to put a small controller in the base to drive all the leds and that is how it has stayed for most of the last two years.

I’ve actually been working on this on and off for a few months now; I wanted to get to a point where I had something real to write about, rather than let it be yet another idea that doesn’t go anywhere. It’s been at that point for a while now, but every time I’ve sat down to start writing, I’ve drawn a blank.

Rather than let another month go by without doing something about it, I’m taking the pressure off myself by writing this post to introduce the subject, but without any real content.

For now, here’s a preview of where it’s heading. 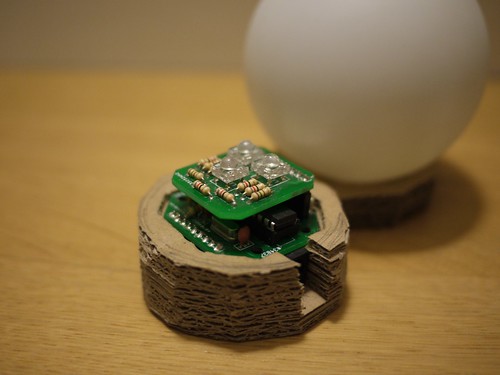