One of the parts of the Internet of Things that I feel often gets overlooked are the Things. There seems to be a new IoT gateway, hardware platform or consortium to “standardise” every week.

These are all honourable activities to move things either forward, or in the case of standardisation consortium, in circles.

But what about the Things? This is the part of IoT that appeals to me the most. Crafting a Thing that will appeal to a wide audience takes so much more that a bit of hardware and software. It needs designing to be an object that people willingly accept into their homes. This means much more than just the physical nature of the Thing, but at all levels that it is interacted with.

This was one of the inspirations behind my Orb project. But that, in its current state, has a long way to go. It remains the preserve of those who are prepared to get a soldering iron out and write some code.

I’ve known Alex for a few years now. She gave me my Arduino Ethernet shield back in the early days of Tinker and has been a good friend since. As someone with a design background, working in that space, she gets the Things idea better than most.

Likewise, Adrian proved his IoT credentials long ago with Bubblino. Soon you’ll be able to say he (co-)wrote the book on the subject.

They are working to produce a real Thing for the world to buy. The Good Night Lamp is based on an idea Alex had a few years ago and is conceptually simple; a pair of internet connected lamps, one big, one small. When the big one is turned on, then on comes the small one - where ever it is in the world.

That’s it. Nothing more, nothing less. 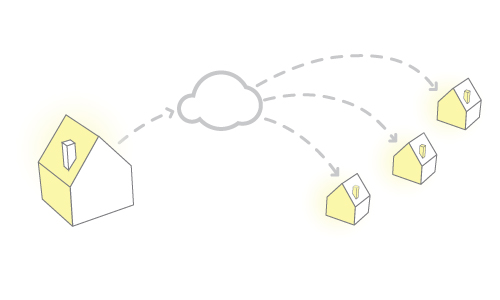 Imagine giving the big lamp to a loved one abroad; a wife, a boyfriend or an elderly grandparent. As they come and go, turning the big lamp on and off, so does the small lamp on the shelf in your living-room. It gives you a level of ambient intimacy; knowing the loved one is there, without being there.

In a work setting, perhaps it signals you’re available for the Skype chat, without resorting to email/IM.

That’s it. Nothing more. Nothing less.

The geek in me screams “but that’s easy to do - just plug an Arduino into a lamp and you’re done”. But that misses the point. This isn’t simply a lamp with an Arduino in it; it’s a Thing that has been designed.

Making Things and shipping them is hard and expensive. To help make it a reality they are currently running a Kickstarter campaign. It’s nearing the end and, as it stands, they’ve got quite a way to go.

If you like the idea, go and back the campaign. Even if they don’t reach their funding target, an unsuccessful Kickstarter project isn’t going to stop Alex and co making this Thing a reality.