Went to Designcamp, got the T-Shirt

Last month, I was fortunate enough to fly off to Austin with a group of colleagues for a week long IBM Design Thinking camp. It was an opportunity to get away from the day job, with laptops all-but banned, and have a deep-dive into what IBM Design is about and how it can be applied.

As an engineer, the temptation is always there to create shiny new features. But no matter how shiny it is, if it isn’t what a user needs, then it’s a waste of effort. The focus has to be on what the user wants to be able to do. This is something I’ve always tried to do with Node-RED; we often get suggestions for features that, once you start picking at them, are really solutions looking for a problem. Once you work back and identify the problem, we’re often able to identify alternative solutions that are even better.

It’s often just a matter of asking the right question; At Designcamp, the very first exercise we were asked to do was to draw a new type of vase. Everyone drew something that looked vaguely vase-like. Then (spoilers…) we were asked to draw a better way to display flowers. At this point we got lots of decidedly un-vase-like ideas that were much more imaginative. It’s the difference between asking for a feature and asking for an idea. The former presupposes a lot about the nature of the answer, the latter is focused on not just the what, but also the why.

This relentless focus on the user isn’t a new idea. GDS, who are doing incredible things with government services, have it as their very first Design Principle. But it is refreshing to see this focus being brought to bear within a transformation of how the entire company operates.

Oh, and of course being in Austin, we got to screen print our own IBM Designcamp T-Shirts to commemorate the visit. 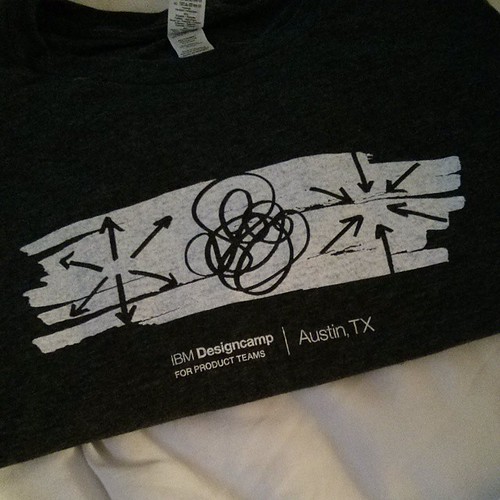 Lots more photos from the week over on flickr.