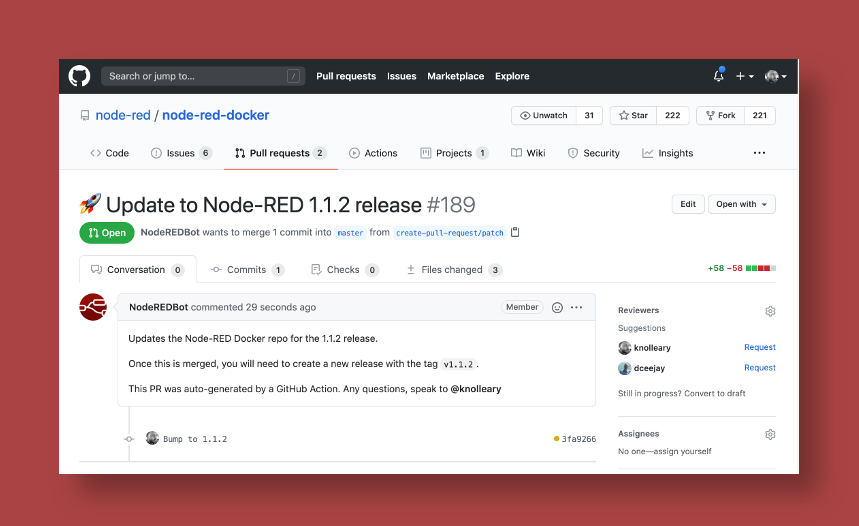 When we do new releases of Node-RED there’s a mental checklist of tasks I run through.

Then about an hour later I remember to kick-off the Docker build and update the Node-RED webpage to reflect the new version number.

For some reason, these last two steps often get overlooked - they just don’t form part of the critical path in my mind for getting the release published.

They have always been ripe for automation as they both just involve updating the version number in some files. The problem was the effort to set that up has never really been worth the benefit.

But then along came GitHub Actions and it all got much easier. This blog post details how I automated away those steps of the release process.

The full workflow is defined here. I’ve linked to the version of the workflow as of the 1.1.2 release just in case the latest version has completely changed by the time you come to read this.

To begin with, we tell GitHub to trigger the workflow whenever we tag a new release.

We then define the environment to run the workflow on and the steps it runs.

The actual work to be done involves:

The checkouts are easy to do with the actions/[email protected] action. As we need to checkout multiple repositories, each is put into its own directory:

With all of the repositories checked out, the next task is to update the necessary files.

This needs some custom code and having looked at the various options such as creating a custom docker file, I went with the simple option of a pair of node.js scripts.

That first needs the actions/[email protected] action to get Node 12 installed and ready to run:

The scripts themselves are:

I won’t bother with a line by line commentary, but they both follow the same structure.

They begin with a bunch of common code that:

They then do their work on the files that need updating - mostly just search and replace of the version numbers - before saving the changes back.

One thing to highlight from the docker update script is the line:

The scripts are run with:

Here’s the configuration of the step for the docker repo PR:

Most of that should be fairly self explanatory, although there are a couple bits to highlight.

First, note the ${{ env.newVersion }} bit that picks up the environment variable set by the docker script so that the version can be included in the title and description of the pull-request.

The second bit that needs highlighting is the token value. This uses a personal access token of a GitHub user that has write permission on the repository, which has been added as a secret to the node-red repository settings.

I original set this up using a token for my account - but that would mean any action in the Node-RED repo would be able to do anything as me on any of the repositories I have write access to. So I created a NodeREDBot user, gave them write access to just these two repositories and generated an access token with the smallest set of permissions possible.

I’ve seen GitHub acknowledge their personal access tokens need finer grained scopes down to individual repositories, but until that happens, we’ll stick with the bot user.

Now, whenever I tag a new release, within a couple minutes pull requests arrive on the docker and website repositories with all the updates that are needed.

As my first foray into GitHub actions, it didn’t take long to get this all strung together. It was very satisfying to see the PRs arrive when I did the 1.1.1 and 1.1.2 releases this week.

Automating these little tasks makes such a difference. Having seen how easy it is to get started, I’m now looking for what else we could use them for.

One idea is to automatically raise an issue on the website repository if any core issue or pull-request has a needs-docs label adding. Updating the docs is often overlooked by contributors and I often spend a week before a release working through the backlog of doc updates needed. Having a tracking issues raised through-out the development cycle should help us keep on top of it.

We also have some API docs on the website that are generated from the source code, but a pain to update on the site. It’s probably less than an hours work to automate that now I have all these pieces in place.