I wish I knew the full history of this book; I don’t mean the story the book contains, rather the actual physical entity that is this piece of awesome. The story in the book is a rather mundane spy ‘thriller’ (I use that word with caution), set in a cold-war era with plenty of ‘intrigue’ (again, with caution). Written in the first-person, it follows British reporter John Terrant as he tries to track down the mysterious Ellen Content with whom he had a brief affair whilst stationed in Berlin. Published in 1954, the book is definitely a product of its age - but more on that later.

I think it’s only fair to put in a spoiler alert at this point; I can’t guarantee that the rest of this post won’t reveal details of the (paper-thin) plot. 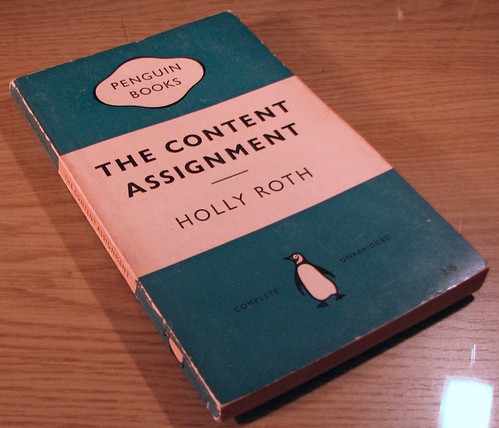 Back to this actual book I’m holding in my hands - well, I was before I started typing. All I know is that it once belonged to my Gran and recently reached me via my parents. Before that, it belonged to one “Gioladys O Williams”. How do I know this? Well she kindly wrote her name in it. Now, I consider myself an expert in reading English having had 28 years of practice, but that first name certainly has me puzzled - “Gladys” maybe, but “Gioladys”?

Update: Adrian kindly points out below that it’s “Gwladys”. Considering the fact “Gwladys” wins in a google fight with “Gioladys”, I suspect he’s right. In fact, now he’s pointed that out, I can’t read it as anything other than “Gwladys”. 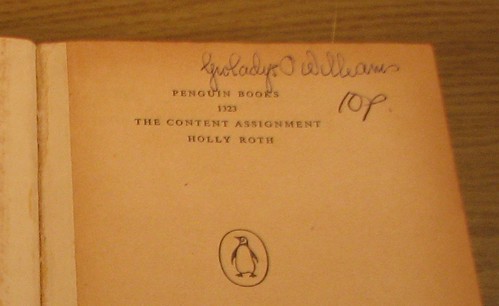 The book starts out telling how John, our first-person-protagonist (FPP) spots an announcement in a paper that a Miss Ellen Content is returning by sea to New York. For reasons as yet unexplained, he becomes determined to get to New York ahead of her. He convinces his editor to fund it as a writing assignment - the Content Assignment. It has taken all of four pages for the title of the book to be fully explained. Magic.

Straight into chapter 2, where the fun starts. Whilst flying, John thinks back to how he first met Ellen Content. Taking us back to Berlin 1948, the scene is set in a city whose “de-nazification was almost complete in the British and America zones, proceeding slowly in the French zone and almost not at all in the Russian zone.” This is the first indication of when this book was written; clearly the Russians are in for a rough ride.

This brings me to why I’ve bothered to write about an otherwise forgettable book; its former owner, Ms Williams, didn’t stop at just writing her name inside the cover. Oh no - she did much more. 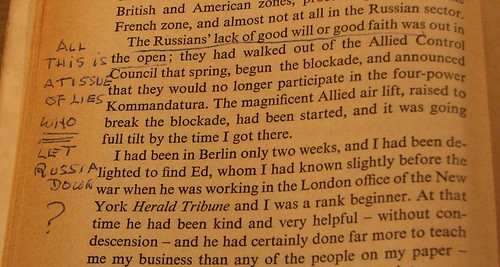 Clearly she has taken exception to the tone of the book, but what amazes me is that she kept going…

At first I thought it was the negative portrayal of the Russians that had upset her, but on the very next page she shows her disdain isn’t limited to that.

Bearing in mind this book is written in the first-person, it’s hard to tell who these comments were directed at; the author or John The FPP.

Up to this point, the comments have all referred to specific bits of text. It takes until page 38 for the dam to break and Ms Williams to write what she really thinks.

I bet she felt better for that - although it isn’t clear from her continuing stream of comments. One noticeable change is that no-one is safe from her pen. First up, are Britain’s security services and police. 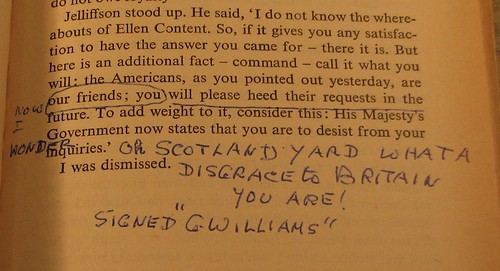 You know she means business; she’s signed her name.

In a shocking turn of events, she goes on to agree with something in the book.

But she doesn’t let that deter her. New York building regulations are a surprise entry in her hit list.

She must have tired at this point, as her next comment is a single word which isn’t entirely obviously what her point is. Perhaps the irony of John The FPP feeling the part of something strange; the book itself.

Towards the end of the book, she returns to her favourite subject

and again makes a dig at the quality of the writing.

In the final pages, she decides to stop holding back and say what she really thinks.

I hope they get the message - Ms Williams does not like it. I almost wish she left it there, but she ends with this.

I can hear her manically laughing as she put down her pen, closed the book and felt incredible pleased with having set the world to rights.

This is what people did before Have Your Say existed.