Having just marked a domain name to expire next month, I realise it has been two years since I had enough of an idea to register it in the first place, but never quite enough to make a site to fit it.

It’s all a bit vague, but at the first PaperCamp, back in January 2009, I had a chat with Alex about one of the talks we’d just seen. I remember thinking there was something worth building as a result of our chat, but I’ve been trying to remember what triggered our conversation. I went back to this write-up from the day and found exactly what it was:

… Beeker Northam … speaks about photographing paper. She doesn’t like throwing away books. She photographs her books. There’s something about photographing them that’s different to scanning them. She’d like to have some kind of web-based way for people to share those bits of books that have had an emotional impact on them but she hasn’t found it yet. There are book sharing sites out there but they all take a library-based approach.

Rather than simply list what books I’d read, I wanted to be able to record the actual, physical objects - a thought that surfaced in this post from a couple months later. A few days after PaperCamp, I registered ThingsWeRead.com as the site never to be. I got as far as putting up a holding page and a blurb of text that feels awfully contrived looking back at it now: 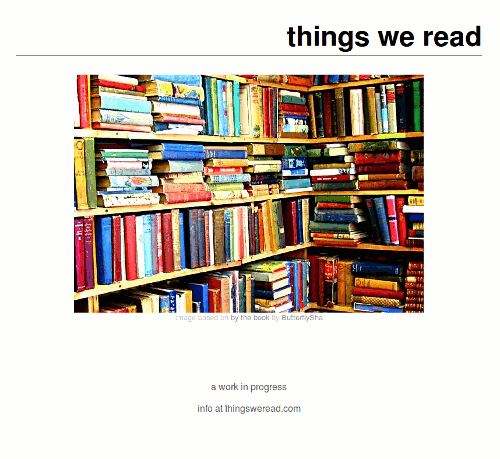 The site was basically going to let you list books, or other things, you’d read and have some nifty way to automatically include tagged photos from flickr to help emphasise the physical link. With all the social network trimmings of course.

As evidenced by this post, the idea didn’t get any further and I suspect there were two main reasons why.

Firstly, it was around this time that I found bkkeepr, which has more or less done all I needed in the book-tracking department where others failed.

Secondly, as much as it sounds like a trendy post-digital thing to do, in reality I have a bookshelf full of books published in their thousand that hold no special place in the world as individuals. For every Content Assignment, which is an amazing physical object, there are far too many Dan Brown’s or Lee Child’s (yes, I know).

So having sat on the digital shelf for two years, I’ve decided there isn’t enough in the idea to renew the domain.